The Daf Yomi of Eruvin 101b tells us a story about an argument that occurred at the synagogue of Tiberias. There is greater detail about this argument supplied from Gemara Yevamos 96b:

Rabbi Elazar went and said this halakha in the study hall, but he did not state it in the name of Rabbi Yoḥanan. Instead, he issued the halakha without attribution. Rabbi Yoḥanan heard that Rabbi Elazar omitted mention of his name and became angry with him. Rabbi Ami and Rabbi Asi visited Rabbi Yoḥanan, to placate him so that he would not be annoyed with his beloved disciple. They said to him: Wasn’t there an incident in the synagogue of Tiberias involving a bolt that secures a door in place and that has a thick knob [gelustera] at its end? The question was whether it may be moved on Shabbat as a vessel, or whether it is considered muktze as raw material. And it was stated that Rabbi Elazar and Rabbi Yosei argued over this case until they became so upset with each other that they tore a Torah scroll in their anger. The Gemara interrupts this account to clarify exactly what happened: Tore? Can it enter your mind that such great Sages would intentionally tear a Torah scroll? Rather, you must say that a Torah scroll was torn through their anger. In the heat of their debate they pulled the scroll from one side to another until it tore. And Rabbi Yosei ben Kisma, who was there at the time, said: I would be surprised if this synagogue does not become a place of idolatrous worship. This unfortunate event is a sign that this place is unsuitable for a synagogue. And indeed this eventually occurred.

This is a fascinating story and it’s own right, however what is even more fascinating is that in 1920 an archaeological dig discovered an ancient synagogue in Tiberias. Lo and behold, one of the surprising features of the synagogue is that aside from mosaic pictures of the temple, menorah, ark etc. there is a wheel of the entire zodiac including a sun god in the center. It would seem, that this is a synagogue that they were talking about which indeed became idolatrous. Rabbi Yosef ben Kisma’s curse came true! This should serve as a lesson to us all where discord and machlokes leads us. 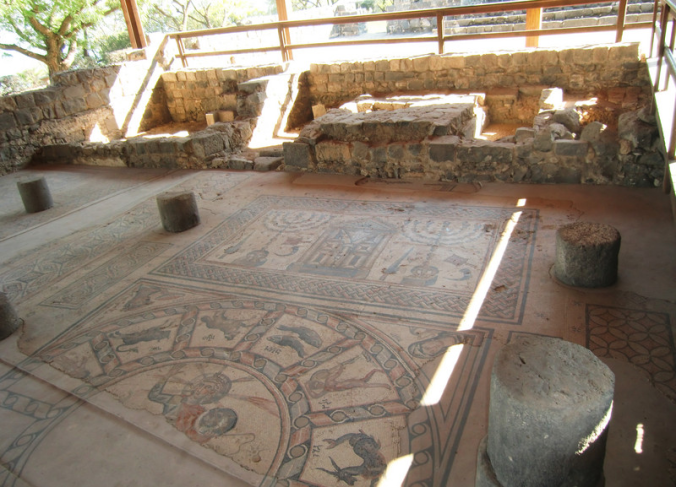 for Video Shiur click here to listen:  Psychology of the DAF Eruvin 101