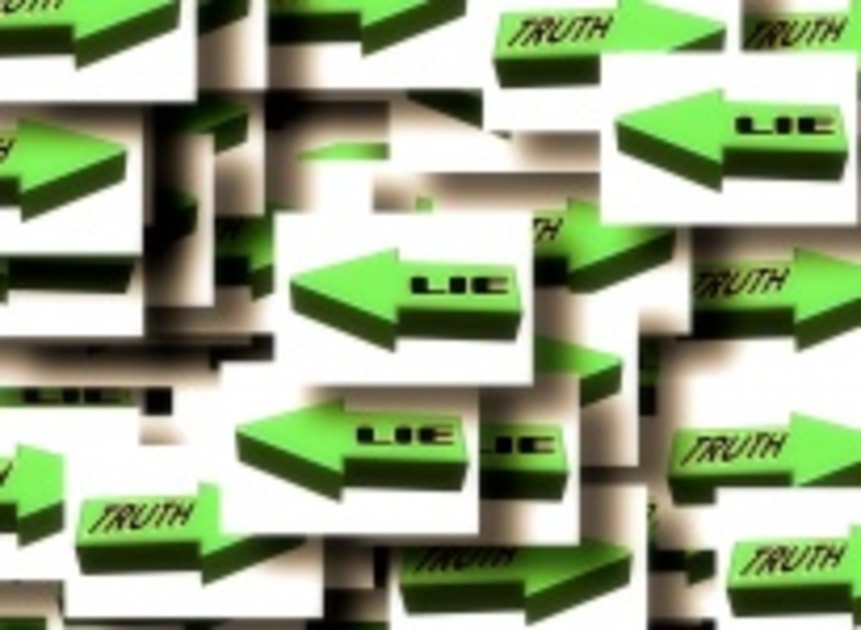 Reprinted from the Jewish Press

As every cheder child learns in the story about Avraham and Sarah, according to Jewish values, one may alter the truth in order to preserve sh’lom bayis.  However, the ethics, halachos and psychology of truth and lies in relationships are far more nuanced than what we were taught in second grade. The Gemara (Yevamos 65b) states:

“R. Ile'a further stated in the name of R. Eleazar son of R. Shimon: One may modify a statement in the interests of peace; for it is said, Your father did command etc. so shall you say to Yosef: Forgive, now please, etc. (Bereshis 50:16). Nasan said: It is a commandment; for it is stated, And Shmuel said: ‘How can I go? If Shaul hear it, he will kill me’, etc. (Shmuel I, 16:2)

At the School of R. Yishmael it was taught: Great is the cause of peace. Seeing that for its sake even the Holy One, Blessed Be He, modified a statement; for at first it is written, My master being old (Bereishis 18:12) while afterwards it is written, And I am old.”

Indeed, we see that Chazal did not consider truth an absolute value at all, and even homiletically describe G-d Himself as withholding the facts in order to maintain marital harmony between Avraham and Sarah. This is despite verses (Shemos 23:7) commanding one to distance himself from falsehood, and forbidding one to lie (Vayikra 19:11), and despite the Gemara’s declaration (Sotah 42a) that a liar does not merit to see the Shechina, and the self-evident ethical importance of telling the truth (Mesilas Yesharim ch. 11 notes that truth-telling is a self-evident value.)

Nevertheless, in the dialectical and analytic methods of the commentaries, a contradiction is raised between this teaching and an important anecdote told about the Amora “Rav”, the eminent founder of the Babylonian Sura of Sura (ibid 63a):

“Rav was constantly tormented by his wife. If he told her, ‘Prepare me lentils’, she would prepare him small peas; [and if he asked for] small peas, she prepared him lentils. When his son Chiya grew up he gave her [his father's instruction] in the reverse order. ‘Your mother’, Rav once remarked to him, ‘it has improved’! ‘It was I’, his son replied, ‘who reversed [your orders] to her’. Rav answered, ‘This is what people say’, ‘One’s own children teach reason’; you, however, must not continue to do so’ for it is said, They have taught their tongue to speak lies, they weary themselves etc’.”

The apparent contradiction here is that if it is permitted to alter the truth for the sake of peace, why did Rav not allow his son Chiya to reverse his instructions in order to fool his mother into providing his father with his due respect, since this would obviously promote marital harmony?  A marriage counselor could think of any number of reasons why such a strategy might backfire, such as it likely would exponentially increase his wife’s rage when she inevitably figures out that she was being “played” by her son and husband, however, if we are to be faithful to the text, Rav did not offer such a reason.  Instead, he only offered the rationale for not using his son’s stratagem because it promoting falsehood.  Thus, the question stands, why was this falsehood not allowed in order to preserve shlom bayis (marital harmony)?  The various rishonim and later commentaries offer answers, each one reflecting a somewhat different ethical perspective.

Sefer Chasidim (426) states that there is a distinction between a falsehood regarding a past matter and a falsehood regarding a future matter.  It is only permitted to lie about a matter in the past, however, to lie about something that has not yet taken place, is forbidden even for the sake of peace.  What is the rationale for this distinction? Perhaps according to Sefer Chasidim it lies in the text of the what Rav told his son, i.e., that he not habituate himself to lie.  Thus, a lie about the past is a one-time exigency.  However, a lie about a future matter tends to lead one to take the easy way out by obfuscation instead of trying to solve the matter in advance. This has important implications for sh’lom bayis, in that one needs to carefully discern when a lie is about keeping the peace and when it is just an easy way out, enabling avoidance or other behaviors that temporarily maintain peace but do not promote real intimacy, respect or connection.

Another answer is offered by Meiri (ibid): It is only permitted to use falsehood to maintain the peace when there is no other option.  Rav, who apparently long ago made peace with his wife’s passive aggressive shenanigans, was in no need of protection from them, and unlikely to become annoyed.  Furthermore, his son’s clever countermove would likely arouse his wife’s ire once she discovered she had been outsmarted.  The advantage of this answer is that it is logical and reasonable.  The problem with this approach is the text of Rav’s reply to his son, has little relation to this reasoning.  However, it may be said that Rav gave his son a simple explanation as a pre-text because anything deeper would have inevitably led to some form of disrespect of his mother, if not l’shon hora.

An additional answer is offered by the Maharshal (1510-1574) in his halakhic commentary Yam Shel Shelomo (ibid).  Since Rav’s domestic situation was constant, such kinds of tactics would lead to continuous lying, and while it might be technically permitted, it would lead via habituation to poor character development.  Thus, Rav sought to avoid this.  This answer bears out very well in the text of Rav’s reply to his son, “They have taught their tongue to speak lies…”.

Regardless of which answer one favors, it is clear that there is no expectation of slavish rigidity to one particular value.  Instead, there are hierarchies of importance based on halacha, and even then, the ultimate arbiter is subjective common sense based on situational and personal considerations.  Thus, peace is considered more important than truth, based on the examples brought forth by the Gemara.  And yet, even so, truth may trump peace, when there are larger contextual and character considerations.

An important distinction is made by Mesilas Yesharim (ch. 26) who maintains that the application of values ought to be in a personal and subjective manner, while the principles themselves remain absolute:

“It is self-evident that each person, based on his profession and occupation, requires a specific kind of guidance and path.  For the appropriate way of chasidus (extra piety) of a person whose main occupation is Torah study is not the appropriate manner of chasidus of a salaried worker, and neither of these paths appropriate for a businessman.  This is likewise true for all matters that a person engages with in this world...not because the concept of chasidus is variable, because this is certainly the same for everyone, as the goal is to do what pleases his Creator.  Rather, since the subject matter changes, it is impossible that the means to accomplish this end would not also change.  It is quite possible that the one who constantly studies Torah without interruption can be of equal piety to one, who due to his personal circumstances, must work the most menial labor.”