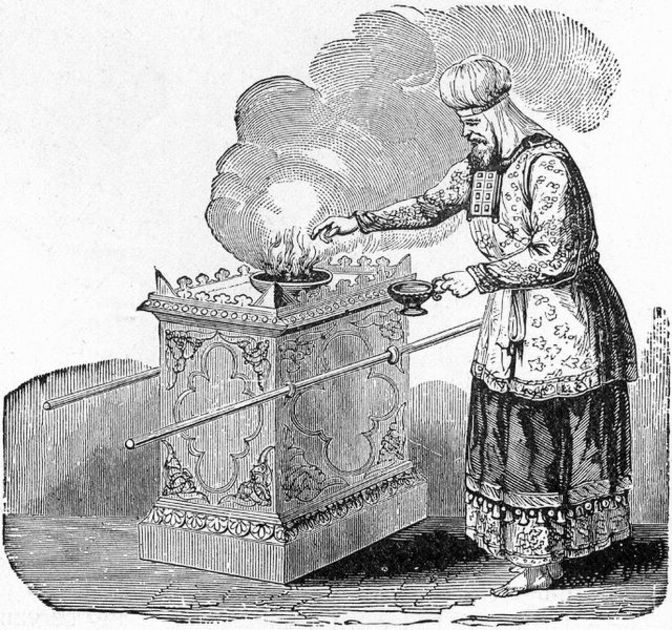 Around this time of year, we read, in Parshas TeTzaveh, G-d's instructions to Moshe, regarding the construction of the Mizbe’ach HaKetores.  In and of itself, the passage of the Mizbeach in unremarkable. What is surprising, though, is the timing and placement of this commandment.

This week’s reading, opens with the commandment to light the Menorah.  It continues with instructions for fabricating the Bigdei Kehunah – the priestly vestments.  The Torah portion then records an elaborate inaugural ceremony and the daily offering.

The Torah appears to conclude the sequence, by assuring us that the enterprise of the Mishkan brings down, as it were, G-d’s presence.  Yet, the Torah then circles back, with G-d instructing Moshe to build the Mizbe’ach HaKetores.  It appears as though G-d is adding the Mizbe’ach Haketores (MHK) as an afterthought: “Oh yes, there’s one more vessel that belongs in the Mishkan…”

G-d, though, is not absentminded.  If the MHK belongs with the other Keilim of the Mishkan, why didn’t G-d mention it, when he first instructed Moshe to build those Keilim?  I am not the first person to ask this question, nor am I the first to offer an answer. I would like, though, to add my thoughts to a centuries-old conversation.

There are other instances in the Torah, where a narrative has seemingly concluded, only to be re-opened.  One is at the start of Bereishis, where the Torah offers a day by day description of the creation of the world, culminating with the seventh day – Shabbos.  And then the Torah doubles back, providing less breadth and more depth, but essentially retelling the story of creation.  Why is creation divided into two narratives?

Chazal, in Bereishis, make an observation.  In the first narrative, G-d is referred to only as Elokim –  בראשית ברא אלקים.  In the second narrative, He is introduced as Hashem Elokim.  Chazal reach a remarkable conclusion. When G-d first created the world, he created it solely with the trait of Justice – signified by Elokim.  When He saw that the world could not stand on justice alone, he added the trait of Mercy – signified by the name Hashem.

So, are Chazal telling us that G-d got it wrong, the first time?  I believe they are suggesting something else entirely.  Chazal are introducing to us a dialectic – that is, two competing values, operating in polar tension to one another.

A world that is not based on justice, is a chaotic world.  A society, in which truth and falsehood, good and evil regularly commingle, is not viable.  One day, it is wrong to kill; the next day, it is o.k. One day, a partner makes a commitment; another day, he can renege.

The universe needed a foundation upon which the differences between truth and falsehood, good and evil were clearly delineated. Otherwise, it would never have escaped the primordial state of Tohu Vavohu – the chaos that preceded the separation of light from darkness.

At the same time, a real-life world cannot function on justice and payback alone.  Children have needs that must be met, even before they’ve paid into the system.  Some adults have special needs and may never be able to carry their own weight.

There are people who commit imperfect, even bad acts, but there is often a context to what they’ve done.  A person who, on one occasion, strays, may have demonstrated upright character, in multiple other settings.  Someone who acts harmfully, now, may have suffered an earlier traumatic event – one that blurs their judgment. Also, the application of unmitigated justice oftentimes demoralizes innocent bystanders.  G-d recognizes that alongside the moral clarity of Elokim, their needs to be space for the compassion of Hashem.

So, there is one creation, and there needs to be a second creation. These two conflicting, competing versions of creation are recorded side by side.

A similar dynamic was present, when G-d taught Moshe about the Mishkan.  The Mishkan’s Keilim, other than the Mizbe’ach Haketores, are first introduced, without any reference to their placement. (This is an echo of the primordial Tohu Vavohu.)  Once, though, the Paroches – the divider between the Holy and the Holy of Holies – is introduced, we are taught that the Aron, must be מבית – inside the (area set off by the) divider and the Shulchan (and corresponding Menorah) must be מחוץ – outside of the divider.

And yet… the enterprise of Mishkan is incomplete, until the Mizbe’ach Haketores is introduced.  The medieval commentary, Tzror Hamor, highlights the double meaning of Ketores.  At a basic level, Ketores refers to the pillar of incense that is offered twice daily.  At a deeper level, the root of Ketores – קטר – refers, in Aramaic, to a knot. According to Tzror Hamor, the MHK unites heaven and earth.

I believe that MHK also brings together the Holy and the Holy of Holies.  When the Torah introduces the MHK, it commands us to place it neither מבית nor מחוץ.  Rather, it is placed לפני הפרוכת – in front of and, essentially, connected to the divider - אשר על ארון העדות - which covers the Aron.

A world in which differing levels of holiness must be sequestered from one another, is one in which spiritual growth is exceedingly difficult.  How shall the simple person reach out to the Tzaddik?  How shall a student of the Yeshiva and Seminary leave their mark on broader society?

It is the Mizbe’ach Haketores that connects and binds, allowing the less holy access to the spirituality of the more holy. Not surprisingly, the signature service of Yom Kippur involves taking coals from the MHK (located in the Holy), entering the Holy of Holies, and creating a cloud of incense, right before the Aron.

Judaism draws stark lines between good and evil, between simple and compound holiness.  Hence, the first chapter of Bereishis; hence, the early construction of the Mishkan.  All the same, it is a religion in which lines of communication are later introduced, allowing for compassion and allowing the not fully holy to experience the spirituality of the Holy of Holies.

May we all experience moral clarity, alongside the capacities to appreciate context and to extend holiness to places it has not yet reached.

The image of the MHK comes from the illustrations of Henry Davenport Northrop. Traditional Judaism views the “horns” of the altar as being cube shaped.

Aron: The ark (of the covenant)

Bereishis:   The Book of Genesis

Chazal:   The Rabbis of the Talmud

Paroches:    Divider between Holy and Holy of Holies