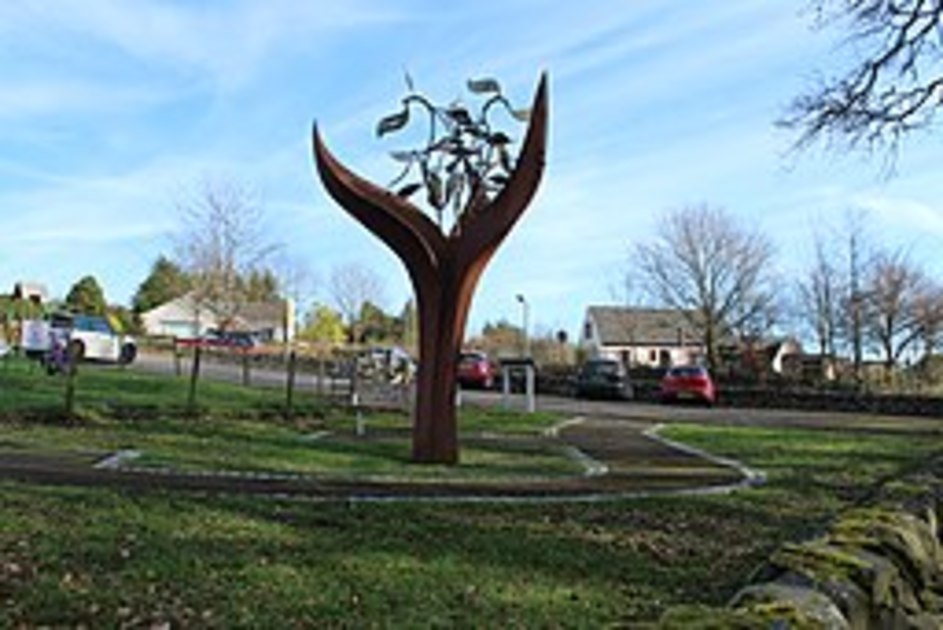 In the last post, I introduced a Chassidic approach to Hallowed Grounds in which holiness allows for vulnerability. The converse is also true; vulnerability oftentimes precedes and leads to holiness. Let’s start with an illustration:

There are few life forms that showcase the dynamism and sheer beauty of creation as does the (deciduous) tree.  Springtime, small shoots of green and red appear on its heretofore bare branches.  Out of the buds, emerge the leaves and blossoms that will soon adorn the upper surface of the tree.  When, in the summer months, the sun’s rays are more direct, the intertwined, covered boughs of the tree form a canopy that provides shade.  As the weather turns colder, the leaves take on their brilliant Autumnal hues and then gently cascade to the ground.  What can be said, though, of the winter months?  In what manner does the tree exhibit beauty during the coldest of seasons?

One thing is certain.  It is particularly during the winter that the essential features of the tree are most visible.  There is no leaf cover to obscure the finger-like projections of the tree limbs, nor are there blossoms to hide the color and texture of the branches, nor are there fruits to conceal the shapes of the twigs.  The bird nests that the tree has been hosting, all year long, are revealed in the winter, as are the blemishes and scars on its boughs.  It is when the tree has been bared of all its foliage, that its most enduring (and perhaps endearing) aspects become most prominent.  Therein lays the special beauty of the tree in the wintertime.

People are not all that different than trees – Ki ha’adam etz hasadeh.  Iyov, Judaism’s exemplar of suffering, struggled through a personal winter.  Stripped of his wealth and of his children, Iyov commented on the inherent vulnerability of man:  Unclothed I exited the womb, and unclothed, shall I return.  Even as adversity left Iyov physically unrecognizable, it rendered him spiritually and emotionally transparent, providing a glimpse of the innermost workings of his mind and soul.  The beauty revealed in Iyov (the person) and through Iyov (the Sefer), finds few if any parallels.

Indeed, beauty and vulnerability have been closely linked from the moment that the ancestor of all mankind, Adam, walked the earth.  A prominent feature of Adam – one of the few actually mentioned in the Torah – during the brief period in which he basked in the splendor and glow of Gan Eden, was his being unclothed.  Why is this so?

An answer can be found by considering two ideals that are closely related to vulnerability – openness and trust.  Openness is a willingness fully to experience the presence of another being, without retreating from the encounter.  In order to risk openness, though, an individual must sense, or trust, that the other will not abuse or misuse the window provided.

A helpful illustration of these qualities follows.  A father invites his son to join him on a pleasure trip that will last for a few hours.  If the son fully trusts that his father will not criticize, judge or otherwise overload him, he (the son) may leave behind, for the few hours of the trip, his smart phone, tablet and other conduits to the outside world.  In the absence of all this “protective gear”, father and son can forge another link in a relationship that is both attractive and meaningful.1

A similar dynamic was in place, at the beginning of time.  Adam’s being unclothed represented a willingness, on his part, to relate to his Creator openly, without any distractions or barriers.  Adam’s openness could have only arisen from a sense of trust that the (relatively) permeable boundaries set by Hashem in the relationship between them would lead to the greatest possible good.  Had Adam been able to sustain his initial levels of trust, openness and vulnerability, it would have only been appropriate that he continue to experience Hashem, amid the beauty and splendor of Gan Eden.

When Adam ate from the Etz Hadaas, though, everything changed.  On one level, Adam’s act demonstrated an unwillingness to abide by the limits regarding knowledge and power, set for him by Hashem.2 Adam, thus, moved away from total trust in Hashem toward self-reliance.  On another level, Adam’s foray into the realm of temptation, introduced an array of barriers between himself and Hashem.3 These barriers diminished his capacity for openness.  On either level, Adam was trading his sense of vulnerability for the protection of clothing.  In the process, he paved, for himself, the road leading from Gan Eden’s blessedness and beauty to the barrenness that lay beyond.

If the barriers erected by self-reliance and lack of openness characterize the (post-sin) landscape – one that has been cursed by Hashem – what is the force that can dismantle these barriers and return the land to its pristine, Eden-like, state?  Although it is rarely sought after and should never be wished upon others, suffering might be just one such force.

Suffering narrows the field of choices before a person.  It topples the supports on which they lean and removes the protective layers that insulate them from vulnerability.  Indeed, vulnerability, openness and diminished self-reliance, were all represented, at the S’neh, by Moshe’s being stripped of his defenses… or shoes.  It was here that his connection to Hashem was redolent of the primeval relationship that existed between his ancestor, Adam, and Hashem.  The ground that he touched, under such circumstances, returned to its sin-free and hallowed state.

In summary, the Chassidic understanding of Moshe’s removing his shoes suggests that two complementary chains of causality are at work.  On one level, suffering purifies the ground, thereby allowing a person to experience vulnerability.  On a deeper level, suffering leads to vulnerability and openness, and it is precisely these qualities that restore the ground to its purified, Eden-like, state.

In the next and final post, I will discuss practical implications, for those who find themselves in the presence of people who are suffering.

Gan Eden: The Garden of Eden