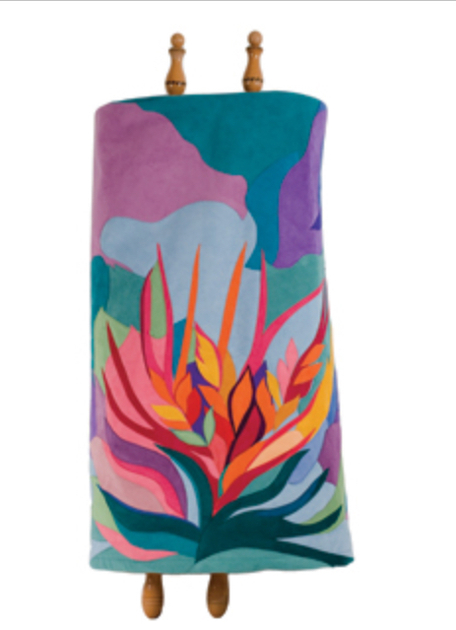 A brief note on timing: The foundations to this series, on suffering, were laid months, even years before I started posting. I don’t believe that I or anyone else could have foreseen the uncertainly, the fear, and the disruption that accompany COVID-19, the new coronavirus, as it spreads across the world.

As I review parts of this, the last installment, I read new meaning into such sections as those that describe Hagbalah – the guarding against intrusion – particularly as we try to protect those who are most vulnerable. Moreover, the notions of silence, isolation, and “wrapping up” – essentially quarantining – trauma take on new meaning.  It is my hope that in the coming days, weeks and months, we can look back at this period as one that we’ve endured and even survived, as we chart our paths forward, unfettered by this plague.

Until now, I’ve approached the relationship between suffering, vulnerability and holiness, from a theoretical standpoint.  What implications might the above have, for those who find themselves in the presence of one who suffers?

I believe that the connections between purity and vulnerability, as well as sanctity and suffering, have implications regarding the manner that we may approach, occupy and later take leave of the personal space of those who are in pain.

Har Sinai, when the Torah was given, needed Hagbalah – the setting of clear boundaries between those authorized to enter and those who were not.  In a similar fashion, the world of those who suffer must often be safeguarded from intrusion.  Each congregant sensed, in the opening anecdote, the need of the two bereaved fathers for their own space, emotionally, as well as physically.  When entering a house of mourning, Halachah dictates that we must wait for the Avel to begin talking.  Among other things, this allows him, in his moment of vulnerability, to regulate the portal of discourse.  Just as we do not enter someone’s dressing room without knocking, so too may we not enter, unbidden, the emotional territory of someone, stripped by suffering of his defenses.

Recognition of the hallowedness of the grounds upon which the sufferer is standing makes particular demands of us when we are in his presence.  We need, for one, to respect their sensibilities.  I vividly recall the feelings of violation expressed by the mother of a wayward child, who was blithely informed by an acquaintance that she was an ineffective parent.  Iyov’s three friends (who, in other contexts, are noted for their discretion) were rebuked for implying to Iyov that his personal shortcomings contributed to his suffering.1  Rashi notes that Hashem indicted Iyov’s friends, at that juncture, for heaping insult upon injury.2

Iyov’s friends, when they first visited, did sit with him in silence for seven days and seven nights.  Of what value is it to sit with a friend and say nothing?  One thing can be said:  When we allow ourselves to silently connect with a friend in pain, we are showing solidarity, respect and empathy.3

Oftentimes, someone who has faced adversity and shared its details with another person will shift to a neutral or lighter topic before concluding the conversation.  This is healthy and normal.  It may even reflect the interrelatedness of suffering and holiness.

A holy object, perhaps due to its connection with vulnerability, is rarely left out in the open.  A Sefer Torah, when we finish reading it, is rolled, bound and covered.  It is then accompanied to the Aron Kodesh, in whose protective custody it reposes, until the next reading.  In a related manner, holiness does not allow for frequent access.  The Kodesh Kadashim, at the close of the Yom Kippur Avodah, remains off limits, for another 12 months.  Keeping with this theme, one who recounts the details of a particularly painful situation may wish to “wrap up” his painful account with a less emotionally charged topic.  The suffering individual’s small talk can, in this context, serve as a virtual air lock between the intense vulnerability of confiding and the relative safety of silence.

Decades ago, when I was in training, I conducted a session in which the idea of wrapping up hallowed ground took on a unique and, at the same time, literal meaning.

I was providing therapy, outside of my community, to a pre-teen – let’s call him David.  Prior to one session, I placed a package of modeling clay on the table around which we normally sat.  David noticed the clay soon after he entered.  He looked at me quizzically, I nodded and he began to knead and mold the clay.  David’s conversation, as the clay began to take shape, was casual.

As the session progressed, though, his models became increasingly elaborate and some even took on grotesque features.  He was working quietly now.  After an extended period of silence, David began to relate, in hushed tones, the details of an event that occurred, more than a year prior, in which a member of his extended family had threatened him with a knife.  In this encounter, David experienced fear, shame and humiliation.  As we conversed, I tried to support him in articulating the different facets of his traumatic experience.

Toward the end of the session, I informed David that it was time to take apart the models and separate the clay into its primary colors.  There was a solemn expression on his face, as he pounded the now separate pieces of clay into the same rectangular shapes in which he had found them.  With the slabs lying on the table, David asked if any other children play with this clay.  I answered in the affirmative (silently wondering whether he was concerned that the clay would somehow divulge his secrets to them).  David carefully placed the pieces of clay onto a large sheet of paper and started, methodically, to wrap them.  When he was done, not even a millimeter of clay was visible.  David gently deposited the package of clay on the table and slowly walked towards the door.  He seemed, as he left, quieter and more serious than at any time I could recall.

In closing, we can be most helpful to someone in pain, when we are mindful of the connections that exist between suffering, vulnerability and holiness.  Equipped with this sensitivity, we are better in a position to meet his needs (emotional or otherwise) and honor his preferences.  The respect that we accord the suffering individual is, ultimately, a reflection of the respect that we have for Hashem.  After all, Hashem is with him in his Tzorah.

Kodesh Kadashim: Holy of Holies (in the temple)