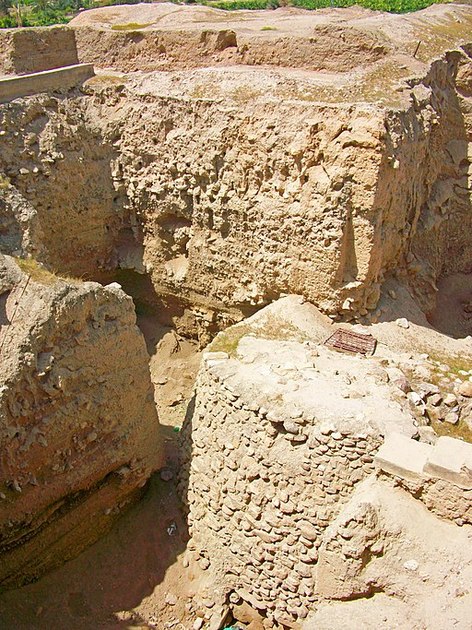 The ancient Jewish custom of Hoshanos focuses our attention on crops, rain and vulnerability.  It includes the act of parading around the Bimah, (synagogue's centrally located table) once a day, for each of the first six days of Sukkos (The Festival of the Booths), and then circling the Bimah seven times on the seventh day.  The seventh day is referred to as Hoshanah Rabbah.  The above parallels the manner that Joshua led the Jewish people around the walls of Jericho, once a day, for six days, and then seven times on the seventh day.

Question: The result of Joshua’s Hakafot/circuits was that the walls of Jericho came tumbling down.  Is there something the ancient Prophets intended for us to tear down, when we walk the Hoshanah circuits?

Answer 1: No, the ritual is simply about salvation.  When the ancient Jews approached Jericho, the Mannah had very recently stopped falling.  They were not sure from where their next meal would come, and they needed access to a habitable place.  Those who encircle the Bimah, nowadays, seek agricultural and financial sustenance.

Answer 2: It’s not exactly about tearing down.  It’s more about achieving the keys to success.  The capture of Jericho was considered the linchpin to the conquest of Israel.  The Jewish people, at present, seek the keys to material and spiritual prosperity.

Answer 3: The Hoshanah ritual does actually symbolize the tearing down of something.  In Kabbalistic terms, the Jewish people are enjoined to remove the Klipah – the husk – from the "kernels" of spirituality they seek.  The Klipah is indeed meant to be shredded and discarded.  The ritual of circling the Bimah speaks to a search for genuine, unadulterated Spirit – and the need to shed that which is less than pure.

Answer 4: This one takes a bit longer to explain.

Point A. We find, in the book of Joshua and the Book of Kings, a linkage between fertility and the sustained destruction of Jericho’s walls.  Three examples follow: 1. Joshua guarantees that anyone who rebuilds the walls of Jericho will end up burying all of his children. (So, if “yes walls” means “no children,” then “no walls” means “yes children.”) 2. Eliyahu/Elijah, centuries later, following Chiyel’s recklessly and tragically rebuilding Jericho’s walls, decrees that a drought will occur across the entire land of Israel. 3. In related fashion, the Rabbis of the Talmud teach that Eliyahu’s drought decree immediately followed King Ahab’s attempt to disconnect, or wall off, Chiyel’s reckless act from his (Chiyel’s) personal tragedy.

“It’s just a coincidence,” pronounced Ahab.  “No water for you,” countered Eliyahu.

Eliyahu's declaration is predicated on the earlier warning of Moshe to the effect that idol worship, which, according to Ibn Ezra, is a form of placing a wall of intermediaries between ourselves and G-d, will lead to a closing off of Heaven and a cessation of rain.

Point B. In Jewish thought, the Element of Water – very much a focal point of Sukkos and Hoshanah Rabbah – represents fertility and prosperity, alongside of sexuality and intimacy.

Point C. The original Woman of the Wall was Rachav the Zonah.  The term Zonah, according to most authorities, means woman of ill repute.  Rachav, who dwelled inside of the (thick) walls of Jericho, in her role as Zonah, was arguably someone who had walled off the different parts of her life.  She had walled off sexuality from procreation; she had walled off eroticism from emotional intimacy. She may have even walled off her physical acts from her own conscious experience.

As an aside, when I shared this thought at a class I delivered, a year ago, two participants offered the following.  At a traditional Jewish wedding, the bride encircles the groom seven times.  This symbolizes not only her drawing a boundary that surrounds herself and her groom, such that each is separated from hitherto potential partners.  It also represents her taking down whatever walls may have been placed between herself and her groom, until this point.

Point D. Yirmiyah/Jeremiah, Rachav’s descendent, prophesized the destruction of the Temple walls.  It is he who decried (Chapter 7) the manner that the Jewish people essentially misused the Temple - through complacence and over-reliance on ritual.  They had essentially walled themselves off from spiritual and ethical life – the necessary ingredients for a relationship with G-d.

Point E. Tying it all together, when we perform the ritual of Hoshanos and encircle the Bimah, we aim to take down the walls that hold us back from an intimate relationship with G-d and with those who are most important in our lives.  Moreover, we are removing the barriers to integrated and conscious living.  This is the secret of the Element of Water.  It is the joining of prosperity, fertility, intimacy and awareness.

To summarize: On Hoshanah Rabbah, we seek

May we merit, this Sukkos, to achieve everything that the Prophets intended for us to achieve, in encircling the Bimah and in reliving the ancient Jericho experience.